For Some Modern States Students, Earning a Degree Is About Reaching Goals, Love of Learning 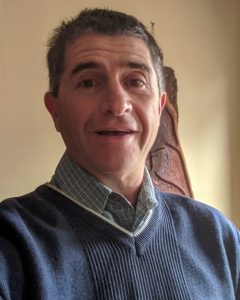 At Modern States, we want people to use our free college-level courses however they see fit, because continued learning is vital for both the health of our world and each of us as individuals.

While for some students, earning a college degree means access to a higher paying career, for others it is simply about a love of learning and a desire to set and reach personal goals.

Such is the case with Guillermo Rivero, a 52-year-old New Jerseyan who moved to the U.S. from his native Argentina in 2000. Rivero is among Modern States’ most prolific learners, having earned 11 free College Level Examination Program (CLEP) exam vouchers from Modern States for completed courses. He’s used them to improve his math skills, to earn credit for his Spanish knowledge, and even to better understand the history of his adoptive country, in which he now holds citizenship.

Rivero, whose first job in the U.S. was cleaning factory floors, is now a flour mill supervisor and enrolled at Hudson County Community College (HCCC) near his home in North Bergen. His goal is an associate’s degree, and don’t for a second doubt that he’ll someday earn it.

In the last few years, Rivero earned 46 credits through CLEP, the collection of 33 general education exams offered by the College Board. Passing CLEP scores are accepted as credit at more than 2,900 colleges and universities, including HCCC. Rivero now needs just 14 credits through HCCC, which he plans to finish over the next couple of years.

“At this point, I don’t expect this to be a life-changing event, but it’s something I want to get done,” he said. “It’s something that I have in my mind. I don’t think it’s pride as much as personal satisfaction; saying `I accomplished it.’”

Whether earning an associate’s degree to grow a career or simply to grow a mind, college is expensive. A credit at HCCC is $149, meaning Rivero saved $6,854 by earning those 46 credits through CLEP. He also saved more than $1,000 in exam and test center fees. Modern States provides vouchers to cover students’ $89 CLEP exams and also reimburses students for test proctoring fees.

“If you’re going to make it financially so easy for me, I’m going to put in the hard work,” Rivero said, noting Modern States’ generosity. “I’m going to take the time. They helped me to get the credit, so I never took it lightly. They’re doing their part; let me do what I have to do.”

Yes, folks. Guillermo Rivero is a real person, and an inspiration to all learners. Our team at Modern States could not be more proud of him or excited for his continued educational journey.