Raghav Chari discovered his life’s ambition in third grade. Things have been looking up ever since.

“We had independent reading time, and I didn’t find any enjoyment in it at all,” Chari, 17, said in an interview. “But there was this one astronomy book and it had pictures of stars and black holes. I liked it so much I read that same book every day of third grade. Ever since then, I’ve been interested in the topic and knew I wanted to go into the field.” 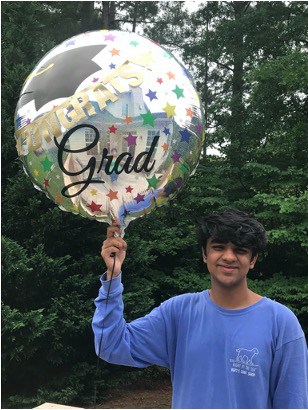 Get to know Chari a little and you won’t be surprised at his focus on success and his drive to do good. He’s an Eagle Scout; a district treasurer of Key Club, the international student volunteerism and leadership organization; is working two internships; and still finds time to ski and swim.

None of those activities, however, have detoured him from his career dream of someday discovering alien life in the universe. By the time Chari got to high school, he was determined to study theoretical and nuclear astrophysics at the University of Tennessee’s Joint Institute for Computational Sciences, the only such program within reasonable distance of his North Carolina home.

Unfortunately, while Tennessee may have been in drivable reach, by the time Chari entered the final semester of his senior year this past January, he was worried it wasn’t in financial reach. Four-year, out-of-state tuition at Tennessee is $172,000, according to Chari. He pared that down by earning scholarship money, but still didn’t think he could pull it off.

And then the stars aligned.

In March, Chari came across Modern States on social media, and quickly realized the opportunity that was in front of him. So, he got to work, digging into our free online collection of college-professor-led general education classes tied to the College Board’s CLEP exams.

Chari’s best learning style is to put in long hours over a short period of time. So, for each Modern States course he took, he spent about six hours a day for three days learning the material, then soon after sat for the corresponding online proctored CLEP test. Modern States covered the cost of each $89 CLEP exam, and proctoring fees.

In just two months, Chari was able to digest six classes and pass all six corresponding CLEPS, earning 21 credits that will transfer to Tennessee, one of the more than 2,900 colleges and universities that accept passing CLEP scores as credit. Combined with AP credits, he saved a year’s worth of room and board, which is around $42,000 for out-of-state students.

Our team at Modern States sees ourselves as particularly aligned with Chari, who has made charity a central component of his youth. In fact, in appreciation of his own success with our program, he reached out to us to see if there was anything else he could do to help spread the word.

“I wish everyone knew about this, especially people who can’t afford to go to college,” he said. “It’s shocking that there’s an organization that cares so much about providing charity. Nothing else. Pure charity. I’m so thankful for that.”

And we are so thankful for him and the many other students who not only had success with Modern States, but then wanted to spread that success to others.

We do not yet have proof of intelligent life out there in the universe, but we do know a particularly intelligent and compassionate example of life here on Earth. Hopefully, Raghav Chari will someday be the one to make that big extraterrestrial discovery, and when he does, he’ll be a terrific representative of the best of us.