How to Get Your Associate’s Degree Before Graduating High School

And a bachelor’s degree on your 19th birthday; and an MBA five months later

Ahmad Salem is doing life his way, and he’s crushing it.

Full of motivation, Salem was a 16-year-old high-school junior when he began working full-time in retail after school and during weekends. A native of Jackson, Tennessee, his plan was to eventually take advantage of the state’s free community college grant program and save money towards a bachelor’s degree.

Then one day his English teacher casually wrote the name of our philanthropy on the classroom blackboard, forever changing his educational trajectory. Within a year, Salem earned his associate’s degree — two weeks before receiving his high school diploma. He graduated college with a bachelor’s degree in Computer Science on his 19th birthday, and about five months later, is about to complete a master’s degree in business administration.

That’s right. Most of his peers have yet to select a college major, and Salem soon will have his MBA, the result of simple, out-of-the-box thinking and outsized effort. 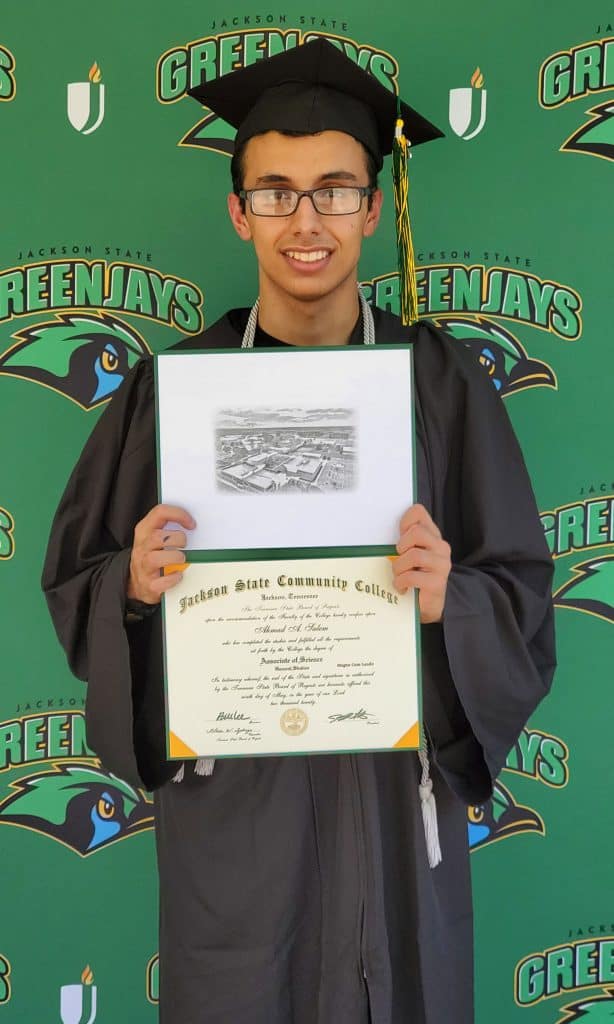 “I’m not the special guy; I’m not the genius,” Salem said in an interview about his educational journey. “I’m not the Harvard student who’s going to be the next Bill Gates. I’m your average working guy who runs the local store in your town, and I did what I needed to do because I followed the steps. I saved my money. I studied whenever I could. I took my tests, and I did it.”

The son of Middle Eastern parents who emigrated just before he was born, Salem grew up hearing the “American Dream” was dead; that he was going to end up saddled with debt, spending his 20s and 30s working just to break even.

That wasn’t acceptable to him, and he saw a way out the day he was introduced to our free online collection of college-professor-led general education classes tied to the College Board’s 33 CLEP exams. Passing CLEP scores are accepted as credit at more than 2,900 colleges and universities, so Salem got to work.

He could have quit after just his first CLEP effort, studying with Modern States and then narrowly failing to pass the Principles of Microeconomics exam. Instead, he persisted, taking our History of the United States I and II classes before earning nearly perfect CLEP scores.

“I then called my community college and said, ‘I’m going to be with you guys in a few years and I already have an account with you. Does my transcript show this?’” he said.

“Yeah, you’re done with your history requirements,” they responded.

Off to the races, he earned 15 credits by the end of his junior year and another 15 that summer.

Salem graduated Madison Academic High School on May 23, 2020, two weeks after he earned his associate’s degree from Jackson State Community College. Due to the pandemic, the graduation was held online. A slideshow featured the accomplishments of the valedictorian and salutatorian, and it also celebrated Salem as the first student in the school’s 92-year history to leave high school with a college degree.

He then continued online education at Thomas Edison State University (TESU), transferring in 70 credits thanks to Modern States and CLEP. Salem took every CLEP offered except for French and German, and became such a frequent visitor to his CLEP testing center, they eventually gave him a job proctoring other test takers.

On March 13, 2021, his 19th birthday, Salem became the youngest person to graduate from TESU. Thanks to his retail management experience, he’s been able to hyper-accelerate his MBA program studies at Western Governors University, and expects to have his degree this summer.

“They say time is the ultimate currency, and you guys saved me a lot,” Salem said of Modern States, also pointing out that our philanthropy saved him more than $50,000 in actual currency.

And in response to friends who’ve questioned his decision not to take the beaten educational path, sacrificing vacation and hangout time, Salem tells them they’re quantifying things incorrectly.

“I’ve given up one year of my life to save the next six,” he said. “I have no debt and nothing blocking me for the next half a decade.”

His next plan? To own a home mortgage-free in the next five years.

“My goal is to take on every single life issue that people face, and destroy it,” Salem said.

We at Modern States certainly aren’t going to doubt him.